Vehicle Break-In Period
The break-in period for your new vehicle is the first 25 hours of operation, or the time it takes to use the first two full tanks of gasoline. No single action on your part is as important as a proper break-in period. Careful treatment of a new engine will result in more efficient performance and longer life for the engine. Perform the following procedures carefully.

Notice: Excessive heat build-up during the first 3 hours of operation will damage close-fitted engine parts and drive components. Do not operate at full throttle or high speeds during the first 3 hours of use. Use of any improper oils may cause serious engine damage. Polaris Premium 4 Synthetic Oil is specifically formulated for your 4-cycle engine.

2. Check the oil level. Add the recommended oil as needed to maintain the oil level in the safe operating range.

4. Avoid aggressive use of the brakes.

5. Vary throttle positions. Do not operate at sustained idle.

8. During the break-in period, change both the oil and the filter at 25 hours or one month.

9. Check fluid levels of transmission and all gearcases after the first 25 hours of operation and every 100 hours thereafter.

Brake System Break-In
Apply only moderate braking force for the first 50 stops. Aggressive or overly forceful braking when the brake system is new could damage brake pads and rotors.

PVT Break-In (Clutches/Belt)
A proper break-in of the clutches and drive belt will ensure a longer life and better performance. Break in the clutches and belt by operating at slower speeds during the break-in period as recommended. Pull only light loads. Avoid aggressive acceleration and high-speed operation during the break-in period. If a belt fails, always clean any debris from the PVT intake and outlet duct and from the clutch and engine compartments when replacing the belt.

Youth Models
The break-in period for a youth ATV, ACE 150 or RZR 170 is the first 10 hours of operation or the time it takes to use the first two full tanks of gasoline.

The break-in period for a RANGER 150 is the first 20 hours of operation or the time it takes to use the first two full tanks of gasoline.

RANGER EV Break-In
For RANGER EV models, pay attention to the above Brake System Break-In section. It's also important to make sure you are practicing proper battery maintenance on your RANGER EV.

To learn more about RANGER EV and other electric vehicles, listen to the It's Electric: Understanding RANGER EV, GEM and Other Polaris Electric Vehicles episode of the Polaris Podcast.

Finding the Engine Hours Meter
To determine how many hours your engine has on it, consult your vehicle’s instrument cluster. 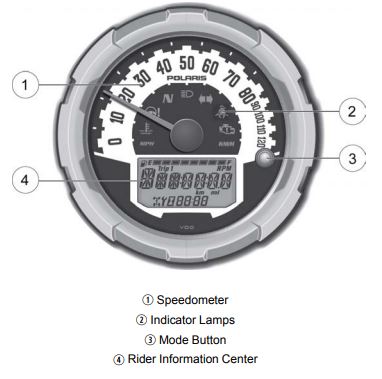 The rider information center (4) is located within the instrument cluster. Use the mode button (3) to toggle through the display and find the engine hour meter.

The engine hour meter can be found within the information display area (1 in below diagram) of the rider information center, along with the odometer, trip meter and programmable service hour interval. 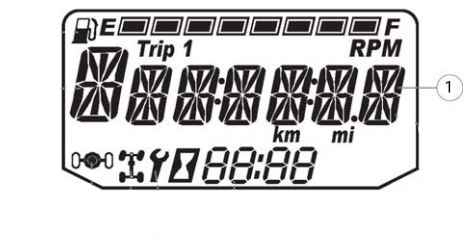 On Scrambler models, the reverse override switch on the left handlebar (pictured below) acts as the mode button when held down for approximately one half second. The override button will not function as a mode button if the transmission is in reverse. 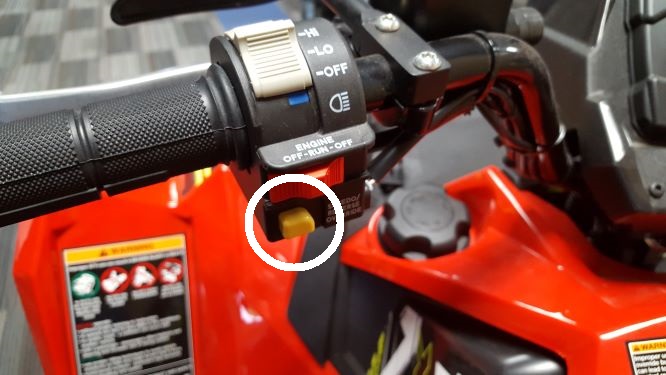 The engine hour meter is located within the rider information center (6). Press and release either toggle button (5) to cycle through the modes.

Engine hours can be found in Area 2 (as shown below) of the rider information center.

The RZR Pro XP instrument cluster looks like this:

The engine hour meter is located within the rider information center (6). Press and release either toggle button (5) to cycle through the modes.

Engine hours can be found in Area 2 (as shown below) of the rider information center.

On the RANGER EV, the hour meter (2 below) can be found above the indicator lights and below the battery discharge indicator on the vehicle’s console. 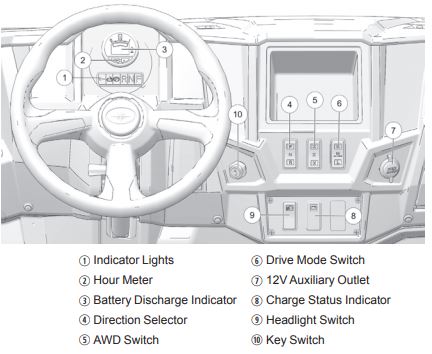 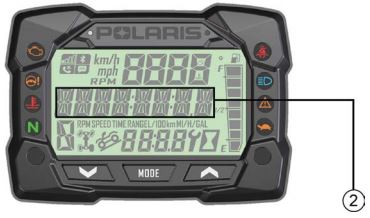 Use the up and down buttons at the bottom of the instrument cluster to change the information displayed until you find the engine hours.

A basic maintenance schedule is attached here. A full list of break-in procedures, new operator driving procedures, and maintenance intervals specific to your vehicle can be found in your Owner's Manual, as well as more details about your vehicle's instrument cluster.