Allow hot components to cool before changing the belt on your RZR. When installing a new belt, position the belt so the part number can be easily read.

Note that belt change procedures are the same for two-seat and four-seat models.

1. Remove the seat and the under-seat storage box.

3. Remove all debris from the entire clutch air duct passage.

4. Check for signs of damage to seals on the transmission and engine. See your Polaris Dealer promptly for service if any seals appear to be damaged.

5. On standard non-EBS models, place the transmission in PARK and push down on the belt firmly to open the clutch sheaves. Then lift upward on the belt while pulling it out and down over the driven clutch outer sheave. 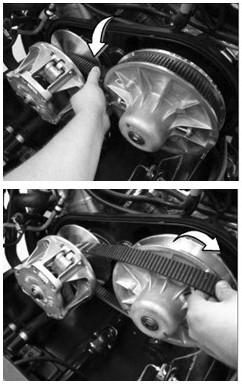 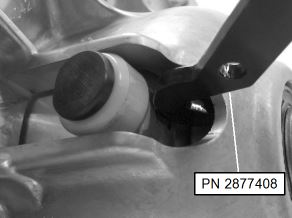 For more information, see your authorized Polaris Dealer. Find a dealer near you with the Dealer Locator.
Additional maintenance tips, procedures and specifications can be found in your Owner's Manual.
To find diagrams and replacement part numbers, use the online parts catalog.

Unless noted, trademarks are the property of Polaris Industries Inc.
© 2021 Polaris Inc.